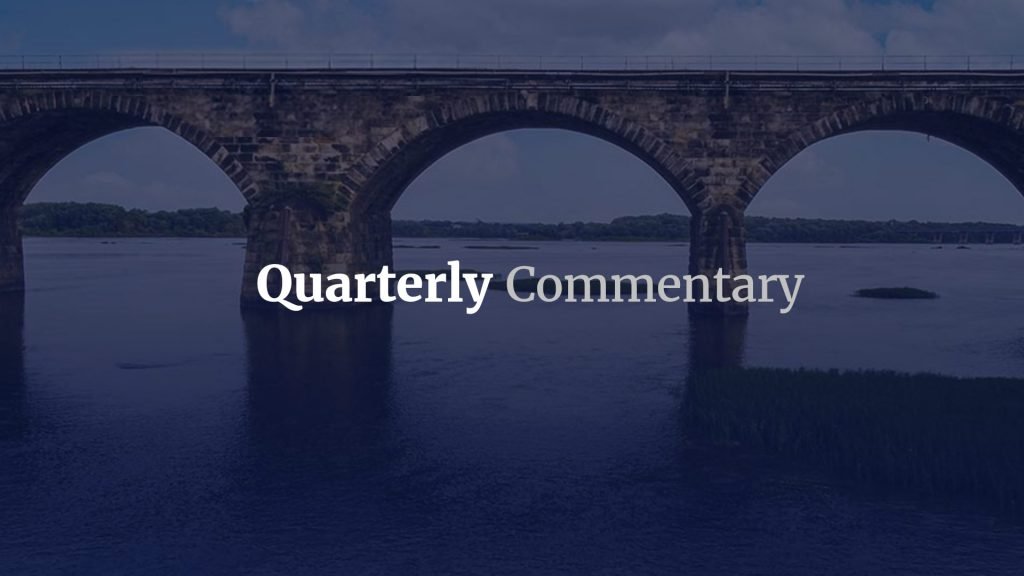 Market & Economy Overview
It’s no secret that 2022 has been a difficult year for the markets, with the first half of the year being the worst for stocks in 52 years and one of the most volatile in decades (see chart below). The S&P 500 ended the quarter -16.4% and was down over 20% from its January highs, meaning we officially entered a bear market. Unfortunately, bonds have not offered much of a safe haven, with the Barclays Aggregate Bond Index losing 4.7% over the quarter. The 10 Year Treasury Rate ended around 2.9% after reaching as high as 3.5%, and high yield spreads widened to 5.6%. 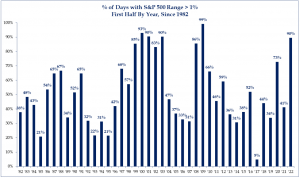 The biggest topic on the minds of Americans recently has been the continued level of high inflation, with the last PCE number coming in at 4.7%. Although it is encouraging that the year-over-year rate went down from the prior month, it is too early to know whether peak inflation has been reached, and the peak could potentially last for months. Since March, the Federal Reserve has been attempting to attack inflation by raising the target Federal Funds Rate, which is at 1.5%-1.75% as of June and could go up another 50 or 75 basis points in July.

The 75-point hike in June was the largest since 1994, indicating that a monetary policy error had been made in allowing inflation to get so high. Markets expect the terminal rate to be around 3.25-3.5% by early to mid-2023, but those expectations have been changing rapidly over the last months. We have also previously mentioned the multitude of fiscal policy errors directed by our federal government, mostly by the current administration, which have caused inflationary pressures. The Ukraine situation and China’s zero-COVID policies have extended the inflation story and increased the odds of a recession, but policy errors are at least equally responsible.

A huge question is whether the Fed can bring down inflation with a soft landing that does not result in a recession. Very few of us expected a recession in 2022, but at this point, it is entirely feasible that we are already in one. Second quarter GDP tracking estimates have turned negative, largely due to weaker consumer spending data, and S&P earnings estimates have moved decidedly lower. Additionally, the Consumer Sentiment Index is at its lowest reading since it was created in 1952, indicating consumers already assume worse times are ahead (see chart below).

What makes it tough to see a sharp downturn soon, however, is how tight the labor market is and how big of a cash cushion remains for upper-income consumers. There are still more job openings than people unemployed, and average consumers came into this situation with relatively strong balance sheets. Americans are dipping into those savings now, but a cushion remains. It’s also not out of the question that we could get a mild recession followed by a second one not long after, much like what happened in the 1980s when the first recession didn’t bring down inflation enough.

The conflict in Ukraine has spent less time in the headlines lately but continues to be a source of global uncertainty. Russia has suffered heavy military losses while making slow but significant advances, and there is still not a clear end in sight. They have also now defaulted on part of their foreign debt, largely because Western sanctions will not allow their payments to go through. This was the first non-Soviet Russian default since 1918. The effect of the war on supply chains and commodity markets could take considerable time to unwind, and it’s too early for investors to ignore the impact that new major developments could have on portfolios.

The bond market has responded to rate hikes this year with a dramatic rise in yields, especially on the short end, which has led to a flatter yield curve with several near-inversions and one small one. It’s quite rare for bonds to be negative for two quarters when stocks are also negative for two quarters, and in the past, bonds have always had positive returns in the quarter after this phenomenon. Yields did drop again to end the quarter, but it could take some time for bonds to make a full recovery. There will also need to be considerably less uncertainty around inflation and rate hikes before volatility can subside.

While most investors have been focused on the issues mentioned above, not much consideration has been given to the progress on a new Congressional fiscal package. A smaller version of Build Back Better, this bill would raise taxes, bring down drug prices, provide renewable energy credits, and extend health care subsidies. As of June, a deal has not been negotiated, but Democrats are weighing how little they can cut out and still appease Sen. Joe Manchin (D-West Virginia), who wants to limit tax increases to $1 trillion over 10 years.

Investment Allocation
The second quarter was poor for most equity classes, but we witnessed a continued rotation from growth to value and slight outperformance of large cap vs. small cap. Interestingly, international stocks fared better than domestic stocks even with global tension and a rising dollar. Looking forward, we believe some of these spaces that have underperformed in the last decade should be able to add value and, at the very least, offer important diversification benefits.

After several years of appearing overvalued, stocks are finally starting to look more fairly valued, at least according to prior earnings estimates. There is room for forward earnings to come down, in which case the market could need to come down with them, but valuations are still more attractive than they have been for a while.

We also still believe that inflation concerns make a case for higher-quality names that distribute cash in the near term over companies whose terminal values are based mostly on future earnings that are now less certain. In other words, we’re more attracted to quality dividend growers than we are to speculative high-octane growers, which is a trend that has paid off this year but we expect will continue. We especially favor sectors that are defensive or tied to continued commodity demand. Even after the underperformance of growth sectors, the S&P is still quite top-heavy, and it stands to reason that the smaller sectors have some room to run relative to the mega-cap names that have dominated the last decade.

The international space has faced considerable headwinds because of Russia’s invasion and the U.S. dollar’s run-up, but valuations still remain relatively attractive and could benefit from the potential of a weaker dollar going forward. Emerging markets also have attractive valuations, but we are proceeding with caution to avoid too much China or Russia exposure.

Bonds have been especially disappointing this year because they have not offered much relief from stock selloffs, but they are more attractive than they used to be now that rates have risen. Of course, rates could continue to climb, so we have been careful to look for appealing fixed income pockets and supplementary sources to find yield, like alternative investments.