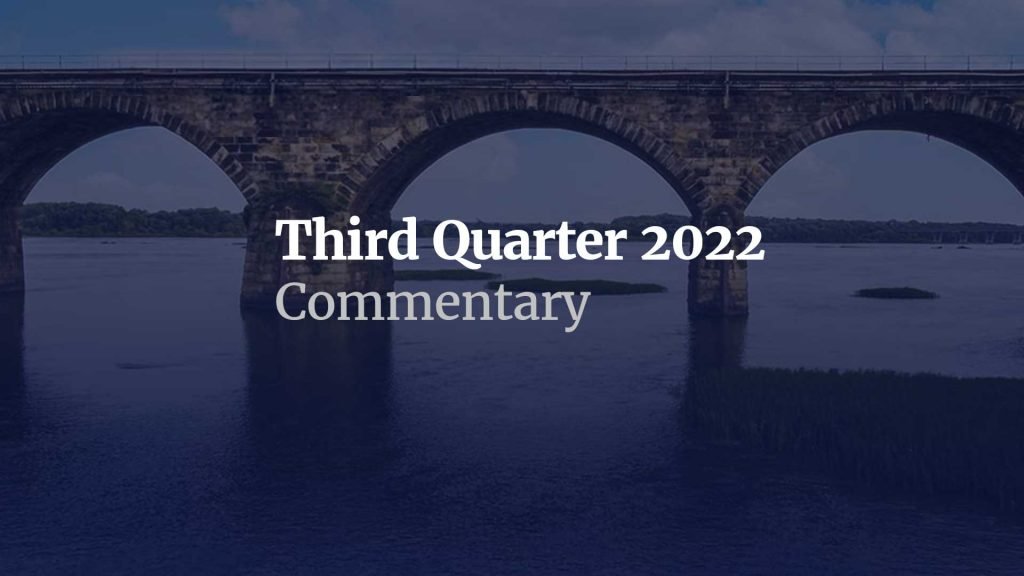 After a disappointing first half of the year for the markets, the third quarter offered little relief. The S&P 500 returned -4.9% in the quarter and -23.9% year-to-date, and it set new lows for the year in late September. The year has not been any less difficult for bonds, with the Barclays Aggregate Bond Index returning -4.8% over the quarter and -14.6% year-to-date. The 10 Year Treasury Rate ended at 3.8% but reached as high as 4%, and high yield spreads widened to 5.5%.

As it has all year, the topic of inflation continues to weigh heavily on the minds of investors and consumers. The most recent personal consumption expenditures price index (PCE) of 6.2% indicates that peak inflation may have been reached in the summer, but the number is still too high for comfort. This is especially apparent to the Federal Reserve, which is laser-focused on restoring price stability through rate increases that have accelerated through the year. The target Federal Funds Rate, which is now at 3%-3.25%, could likely increase another 50 or 75 basis points in November. Markets expect the terminal rate to be around 4.4% by early to mid-2023, but those expectations have been changing rapidly over the last few months. As we’ve mentioned before, the need for these hikes emphasizes the extent of both our government’s and central bank’s policy errors in allowing inflation to get so high.

Of course, foreign nations have not been spared either, with emerging markets and regions like Europe suffering from policy errors and global supply chain constraints as well. The war in Ukraine marches on, energy shortages will continue through the winter, and some central banks are handling these issues quite poorly. For example, in September, the Bank of England sent the nation’s economy into turmoil by raising rates, announcing tax cuts for the wealthy, stepping in to buy bonds again as the pound plummeted, and then canceling the tax cuts. Further strain on international economies has come from the incredible strength of the U.S. dollar, which is exacerbating other countries’ debt obligations and raising import costs.

The rapid increase in rates has reduced the odds of a soft landing domestically, though technically we are already in a recession, according to the definition of two negative quarters for GDP growth. It would not be a big surprise for the economy to start feeling like it’s in a recession by early or mid-2023, however, as the effects of tightening ripple through the system. The outlook for corporate profits has begun deteriorating, and there is still room for earnings estimates to fall further than what most analysts expect. As shown in the chart below, this year’s underperformance so far has mainly come from price multiple compression, not earnings failure. 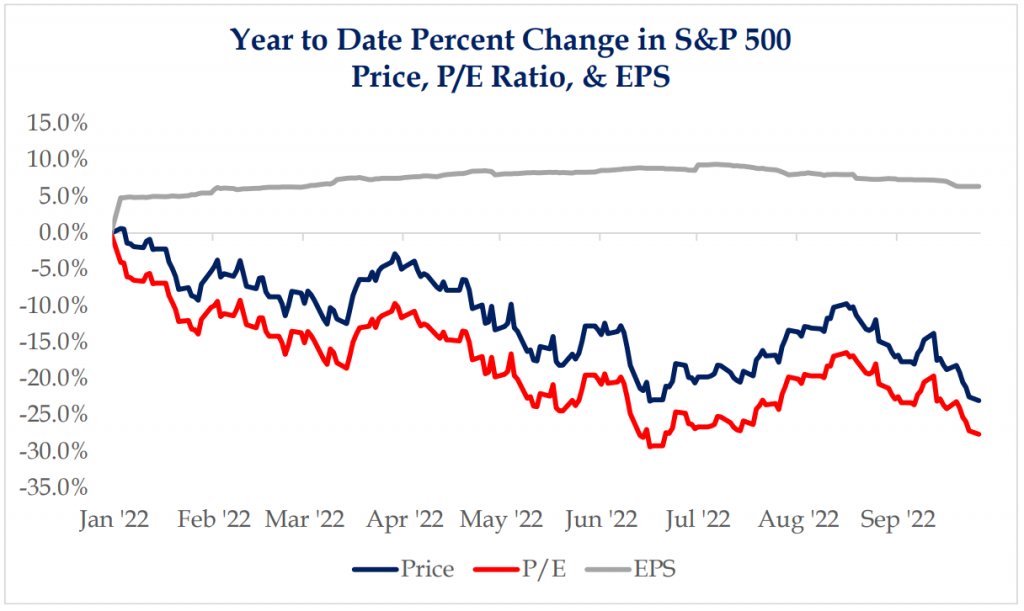 The housing market has begun weakening, as evidenced by lower new home sales, longer listing times and slowed construction. With mortgage rates approaching 7% and home prices that are still historically high, both sellers and buyers are being incentivized to stay on the sidelines. Buyers think prices might come down further, and sellers don’t want to give up the low mortgage rates they have locked in. Housing prices will likely fall, but it is unclear how sharply. We also don’t expect a housing crash or financial crisis as bad as what we saw in 2007/2008. Lending standards have increased substantially since then, and there is still a supply/demand imbalance due to years of lower new home builds.

Needless to say, this year’s drastic rate movements have not been kind to bonds, which is particularly painful since they have not hedged well against stock declines. Eras with such high stock-bond correlations are quite rare and unlikely to be sustained at this level for much longer. The continued selloff has made bonds more attractive, but any forthcoming recovery will probably be more gradual. The yield curve also remained inverted virtually the entire third quarter, which makes its case as a potential recession indicator even stronger.

The markets will also pay close attention to the midterm elections coming up in November, and we’ve learned in the last few years just how impactful our choice of policymakers can be on financial outcomes. The current outlook is that Republicans will probably win the House and Democrats will probably win the Senate. However, Republican odds usually gain as elections approach, so a GOP sweep is hardly unlikely. The good news for equities is that even though midterm election years are often volatile, the S&P 500 has not declined in the following 12 months since 1946. As shown below, this year’s returns are actually not atypical for election years. However, those years did not all face inflation and recession risk like we are now, so this time could be different. 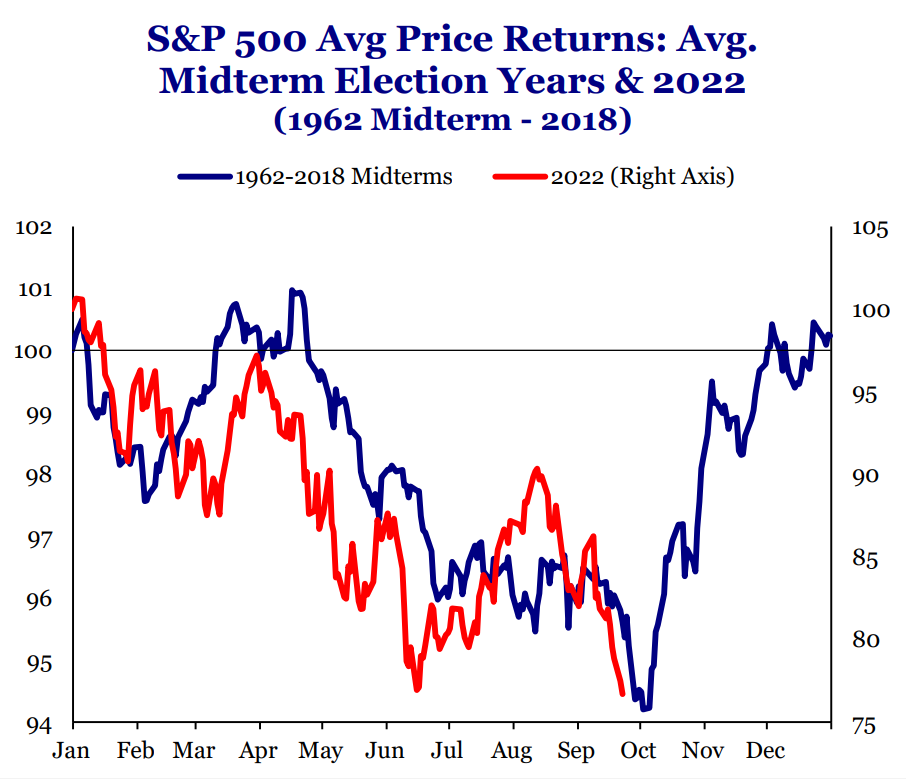 This year has been difficult for almost all equity classes, but with outperformance of value over growth, domestic over international, and large cap over small cap.

As we have all year, we continue to favor high-quality dividend growers over speculative growth companies. We also still favor sectors that are defensive or tied to continued commodity demand. At this point, we want to resist the temptation to bargain-hunt for high beta names until global headwinds subside, and many are still overweight in the S&P. We are attracted to the valuations of small caps but also want to lean toward higher-quality stocks in that space that could withstand recessionary pressures.

The international space has faced headwinds from many directions this year, especially given the war and strength of the dollar, but valuations are relatively attractive. As such, we have a positive long-term view but remain cautious in the near term. The same can be said for emerging markets, which have some hurdles to overcome before we consider overweighting them.

Like stocks, bonds have reached more attractive levels. Of course, rates could continue to rise, but we believe the worst is likely behind us, and it could soon be time to start locking in these higher yields. We also continue to be selective in our exposures and don’t want to lean too heavily into credit risk with current recession concerns. The appeal of alternative investments is not gone, either, as they can be a source of diversified and less-correlated returns in these uncertain times.

Material discussed is meant for general/informational purposes only and it is not to be construed as tax, legal, or investment advice. Although the information has been gathered from sources believed to be reliable, please note that individual situations can vary therefore, the information should be relied upon when coordinated with individual professional advice. Past performance is no guarantee of future results. Diversification does not ensure against loss. The opinions and forecasts expressed are those of the author, and may not actually come to pass. This information is subject to change at any time, based on market and other conditions. 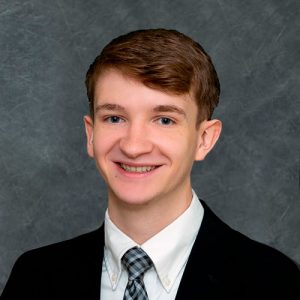